An epic Tug-O-War ensued in mid-April between the Fed and the bond market that shows no signs of going away, even if the Fed is hinting at their ultimate defeat. While the Fed was still sounding hawkish about rates and their projections showed more tightening ahead, the bond market began to move in the exact opposite direction. The 10-year Bond has now dropped from a yield of 2.6% two months ago to under 2% today. While the Fed has been saying the economy and labor market remain on track for growth, the bond market was screaming recession with an inverted yield curve.

There was some capitulation by the Fed in their June meeting. While they did not cut rates, they all but announced there would be a rate cut at the July meeting. Each Fed governor, whether a voting member or not, provides their personal estimate of where rates are headed. As of today, 8 of 17 believe a rate cut will happen this year with 7 of those 8 expecting a cut of 50 basis points by year end. That leaves a thin majority forecasting rates will remain unchanged.

The data over the last month certainly seems to be supporting the bond market’s view of growth. Capex spending has fallen sharply as the benefits of the corporate tax cuts have diminished, the ISM Purchasing Managers Index continues to fall and is at 2016 levels, and employment growth has fallen off a cliff. Add to poor corporate data that shows rising delinquencies at the consumer level and you can understand why the bond market is acting like the Fed may be too late in spiking the punch bowl. 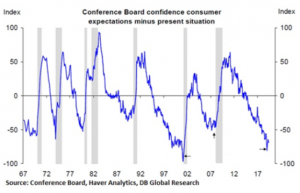 If a rate cut is imminent, and I believe it is, the question becomes whether it will achieve higher growth or simply drive risk asset prices higher. There is equally a plausible case to be made that the current weakness in the data is transitory and primarily the result of the “trade war” with China. The disruption in globally linked supply chains results in the dispute being felt in every corner. Some economists suggest that when Trump and Xi decide to play nice again these headwinds will reverse and the economy resumes above-trend growth.

That seems optimistic to me even though I do not doubt the recent downturn in CEO confidence is negatively impacting growth. GDP growth is still largely driven by what consumers are doing and that is where the concern lies. The Conference Board tracks consumer sentiment and one of the most interesting data points is how consumers view the future versus their present situation. If you expect your discretionary income or wealth to be higher in the future it facilitates a higher level of spending. When you think present conditions are more favorable than the future, spending slows and recessions often follow. The chart shows consumers are now more bearish about the future than at any point in the last 50 years except for 2001. Each time the data spiked down as it is today there was a recession that followed quickly.

I am a believer that the direction data is moving is more important than the relative level. There are other data points you can rely on that suggest the U.S. economy is doing just fine and is poised for accelerating growth. It is possible the Fed lacks transparency not because they are withholding information about their plans, but because they simply do not know which way the economy is moving. A sense of urgency, spurred by the action in the bond market, may force the Fed to act and cut rates even sooner than they would prefer.

Chairman Powell has added a new description when discussing inflation or the Personal Consumption Expenditures (PCE). He states that the Fed sees the inflation target as “symmetric,” suggesting that if years are spent with sub-2% inflation it would not be a problem to have years of above 2% inflation. While it might make sense to a novice follower of the economy, it is actually dangerous to consider. The last few months have demonstrated the ability of the bond market to flex its muscle and dictate policy direction. If the yield curve was not inverted it is unlikely we would be discussing the Fed spiking the punch bowl, but would be talking about when the Fed was going to take away the punch bowl. A mere hint of the Fed being behind the curve on inflation could send yields skyward and really do harm to the economy.